Relics of the Teshio Mine Railroad

※The names of stations remain the same at the time of closure.

In the Showa era, Hokutan (Hokkaido Coal Mining Shipping Co. Ltd.) opened the Teshio Railroad in order to transport trial shipments of coal from the Teshio mine to the Rumoi laboratory. Because the Rumoi Railway already existed, this line was named after Teshio. This line connected Rumoi Station to Tappu station, with an additional junction to the Tappu Logging Railroad. Because of a deadlock on plans to manufacture synthetic petroleum, Teshio Railroad maintained operations at the Teshio mine from 1951. However, due to the closure of the mine in 1967, use of the railway was also discontinued. Hokkaido Route 1048 in Rumoi City, and Route 1006 in Obira are roads which were built on top of the discontinued railway lines.

The Teshio Tentsu Bus Company attained a license for operation in 1961. This company took over the business of passenger transportation when the Teshio Railway was closed in 1967. The main office is in Rumoi City. The “Obira On-Demand Buses” connect Takishita with Tappu and downtown Obira. 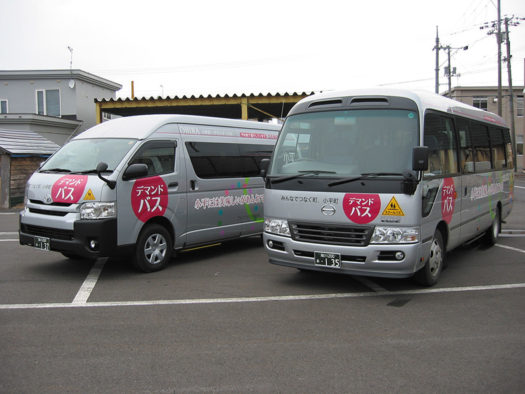 These buses run on a reservation-only system, and will pick you up at or near your home or hotel.